Photo Shoot Report: To do's and whatnot.

Welcome to this bright guide to arrange your own nature photo shoot!

I am so excited: This is my first ever post about my insight activities as a photo illustrator. I always talk about my new works, interviews, awards, collaborations, commercial stuff… but I rarely go beyond that.

I have came to the conclusion that one of the most exciting things you can tell to the world having this job position, is to tell them how it works. To show them what lies beyond the magic, to make what you do more approachable to your viewers, to the people that follow you, and I feel comfortable to open this new window.

This sensation comes because of my last trip to Segovia (Spain), last week. It was intended as a pleasure trip of a couple of days, that would include a massive photo session in the forest of the gardens by the Royal Palace, in La Granja, a little town a few kilometers from the capital.

I traveled with Eduardo Muñoz, those of you who are up to date  may know already that he’s my regular photo assistant and model, as well as my partner in crime. We have done photo session trips before, but these landscapes that we would found later in this one made it feel very special, not only because of the results, but also in terms of connection with nature, if you know what I mean 🙂

Why travelling for photo shoots if I am not a professional photographer?

What can be better than to find your own textures?

This post is specially for those digital artists, and specially photo manipulators, who are starting to arrange their own outdoors photo sessions to start gathering resources on their own for their compositions. We know that there are a dozen of photo stock sites, like Stock Xchange, or some paid ones as well as photo agencies with top quality stock photos, but most of us, over time, start preferring creating our own materials to avoid hypothetical copyright issues and have more control and identity over what you use to create your own visions. And this, is not the cheapest nor the easiest way, but it’s the funniest! Obviously, I can’t take into the really basics here. The way each one takes their own photos is up to him or her, as well as their acknowledgement about general photography.

Anyway, I carried limited equipment. I brought my Canon EOS 550D and two lenses: a 40mm f/2.8 and a 70-200mm f/4.0, both Canon, too. Honestly, I forgot all chromas, tubes and additional stuff (even the tripod!) to get there fully equipped, and I kind of missed some.

The beginning of the French styled gardens of La Granja.

I will get short: We arrived to La Granja our second day, in the morning, with a few under zero Celsius degrees. Our intention was to enter in the gardens of the Royal Palace. We gathered some info on the previous days, and also Eduardo had been there once in the past, so I was going to have a good guide here. The place was big enough to get lost on the forests passed the original French styled hedge gardens and labyrinths, near the palace itself. For our surprise, it snowed the night before in a major area of the forests, so I was going to have the chance to photograph two seasons in a single day. The gardens were the typical mixture of the warm colors of autumn, but you could also see cold toned, snowed areas, frozen lakes, white mountains, and so on. In case that were not enough, there were some very wet, green and lush areas like if it were middle spring, with forests full of ivies, totally deep green to the eye. Once you go far beyond the main gardens and enter into the forests, only a few paths are there and the rest is as wild as it can get.

What to bring on a photo shoot trip

Seems easy, right? Well, we forgot most of them :D. We didn’t get lost but there were times that we had no idea of our whereabouts. And the weather got even colder. So this became a kind of an adventure photo session.

A photography session in the forest

Amazing autumnal landscapes when entering to the forest.

The main idea was to shoot landscape photography for my never ending folder of, duh, landscape photography, that I use for my photo manipulations and mixed media illustrations. After we passed through several human constructed hedge gardens, French style, filled with baroque sculptures, we reached the true gem of this place: the forest.

It was a surprise that it snowed the night before our arrival. I checked several times the weather before going there and although it stated to be some degrees below zero Celsius, it didn’t say anything about snow. But the fun thing was, that it was partially snowed. We found autumn landscapes two feet away from 100% snowed landscapes, all the time, so it’s like the huge forest was sort of bi-located.

Also, it was completely empty. Not a single soul on the forest, which was nice enough to think about a nude photo shoot there, which wasn’t in my plans… But it seems it were on Edu’s head. So we ended up with not one, but three nude sessions. I was a bit indecisive in the beginning, since were at around -3º C and I don’t like to abuse form my models, but it seemed that Edu was more enthusiastic than me, even if we had zero ideas about what to shoot. 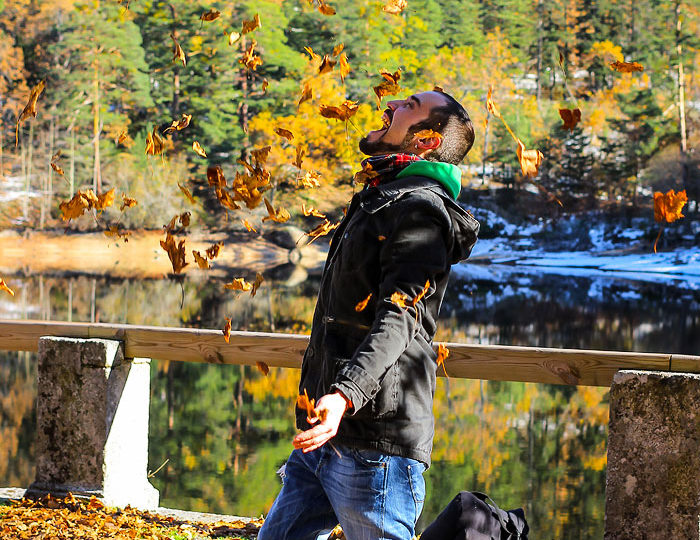 The first one came when we stopped a little to rest near the fantasy-like bridge-building near a viewer on the forest lake.  There was plenty of fallen leaves on the ground and I though it would be fun to throw them on the air and take some shoots… But we all know that I am no friend of dressed models, so I would just take the pics for the fun of it. And there, it all started. Edu got nude and we repeated the shoot. I though it would be a separate incident.

We got deeper into the forest, away from the human made paths (this is why I told you to carry a compass or a GPS app…). We reached a clear area inside the bunch of trees, completely snowed and with a couple of very weird wood structures fallen from old or dead trees. You know, I just love that kind of things. Before I couldn’t ever tell, Edu was already getting undressed to pose on those structures. In the snow. I think it’s been the most frenzied photo shoot I have ever done. I shoot around 100 pics in less than a couple of minutes, suffering by Edu’s health. Luckily, as we say in Spain, “he’s like an oak” 😀

Edu survived the low temperatures for this photo shoot.

We passed through some caves with neat ice stalactites and frozen rivers and later on, we were able to return to the main paths of the gardens. So basically we started to walk back the entrance and I found this:

A paradise of dead leaves!

No need to explain further. I think my eyes started to shine bright to discover such a place with unlimited possibilities to photo shoot… with a nude model. I didn’t even have to ask him, he just throw himself to the dead leaves mountain and we had, in less than five minutes, one of the most exciting photo shoots I have ever done. I will just leave the images to speak by themselves:

So after this, we decided we had enough fun for a day and returned to Segovia, just in time to take the bus back to Madrid an end this fantastic photo trip.

If you are a professional digital artist, most chances are that you may spend a certain amount of money each year for equipment or for renewing old equipment. This includes computers, tablets, cameras and lenses, analogue painting material for textures such as brushes, wood panels, oils, acrylics or watercolors, external storage drives, software licenses, and so on. But I think that form time to time, it is a good idea for us photo manipulators to spend some money and time to get out of our cities or towns and get outside to get photos and materials for our own creations. I know there is plenty of public domain or license-friendly stock images out there, and even you can purchase some in paid stock photo sites with great image quality but, come on… Nothing is as special as if your creations are 100% yours. You will never have to deal again with licenses of use or to be limited spreading lines of credits everywhere you post your artworks. Obviously it is not possible to create a photo folder that can suit all of your needs: You might be able to create your own personal pieces with what you’ve got available in your own resources folder, but don’t forget that clients, most of the time, will probably ask you to create things that you were not expecting, and might need to end up purchasing or downloading a couple of outsider stock photos. As I said on this interview, it’s impossible to get to photograph pengüins in Spain, so it cannot harm to download a license-friendly stock pic if there’s no other way.

To be honest, I spent around 100 euros for the full weekend, including transportation, diets and stay (remember: for two), which is not much money for the almost 1000 photos I was able to gather. For that price I don’t think you can purchase that amount of photos on an agency, so think about it.

Now I can’t wait to start using these photos for my own artworks. Considering my current schedule, I bet I will net a ton of time until I can find some spare time to spend on my own illustrations between commissions, but I bet it will be worth the wait! 😀