Recently, I was contacted by a huge show business. They asked me to do a test on  a set stage design to be hired as a concept artist with their team. They liked very much the outcome but we didn’t reach an agreement in other terms, so I’m not disclosing this prospective client’s name 🙂

I would not usually post test images for clients here, but I have to admit that I feel very pleased with the end result, specially considering that it was done in 8 hours! From a very brief briefing, on which it was only stated that three acrobats would descend to the ground, and when touching it, some metal pipes/tubes would ascend as they dissapear through the top area of the stage. Apart of a futuristic setting asked for the scene, nothing much was provided besides some reference shots from other shows of the company, so I had full freedom to try my skills for the first time on set design and create my own world for the scene.

The idea behind the set for this scene is a futuristic representation of the myth of Prometheus. According to Wikipedia:

“Prometheus (meaning “forethought”) is a Titan in Greek mythology, best known as the benefactor who brought fire to mankind. Prometheus sided with Zeus and the ascending Olympian gods in the vast cosmological struggle against Cronus (Kronos) and the other Titans. Prometheus was therefore on the conquering side of the cataclysmic war of the Greek gods, the Titanomachy, where Zeus and the Olympian gods ultimately defeated Cronus and the other Titans.

Prometheus and Epimetheus were spared imprisonment in Tartarus because they had not fought with their fellow Titans during the war with the Olympians. They were given the task of creating man. Prometheus shaped man out of mud, and Athena breathed life into his clay figure.

Prometheus had assigned Epimetheus the task of giving the creatures of the earth their various qualities, such as swiftness, cunning, strength, fur, and wings. Unfortunately, by the time he got to man Epimetheus had given all the good qualities out and there were none left for man. So Prometheus decided to make man stand upright as the gods did and to give him fire.”

As the acrobats descend to touch the ground, a series of pipes start to reach for the sky, as they return from were they came from. This can serve as an allegory of Prometheus falling down from heaven (Olympus), gifting fire to humankind, thus creating a new civilization on Earth, and then returning to Olympus (where later on he will be punished for eternity for defying the gods). This can serve as well as a metaphor of the new society and civilization we are creating, so I considered it could be a good chance to mix the idea of the birth of man and civilization in this futuristic setting. As the pipes start to ascend from the stage, three different ones emerge from the positions the acrobats have touched ground. The center one will burn a fire when it reach its highest peak depicting the aparition of fire in the new society, while the two lateral pillars will throw black smoke as a symbol of the new personality of this newly born society: polluting machinery. 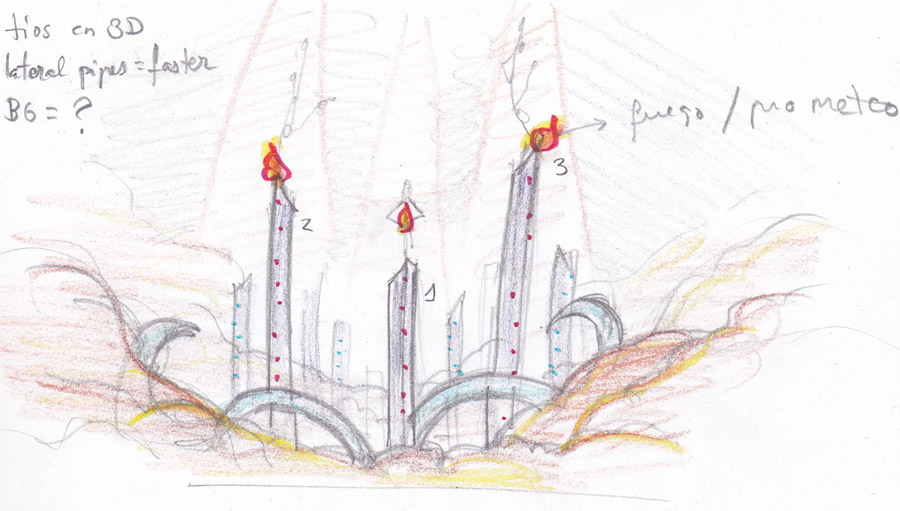 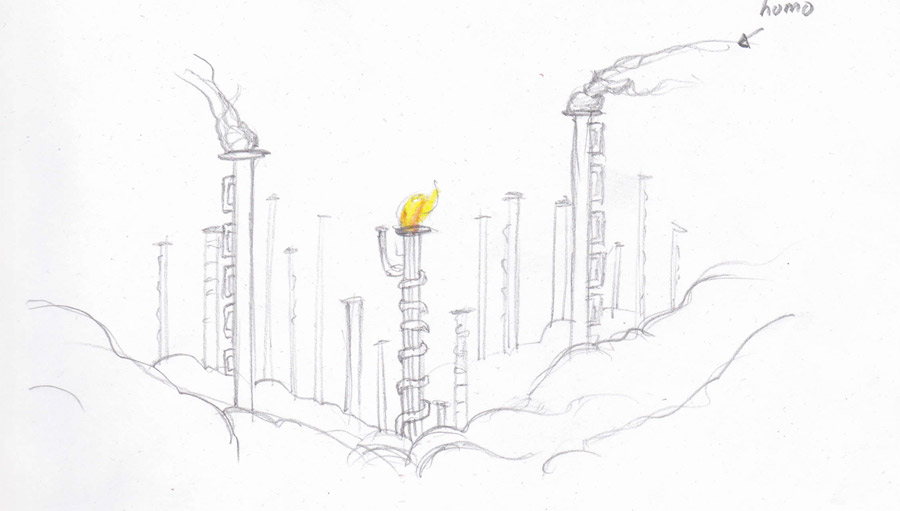 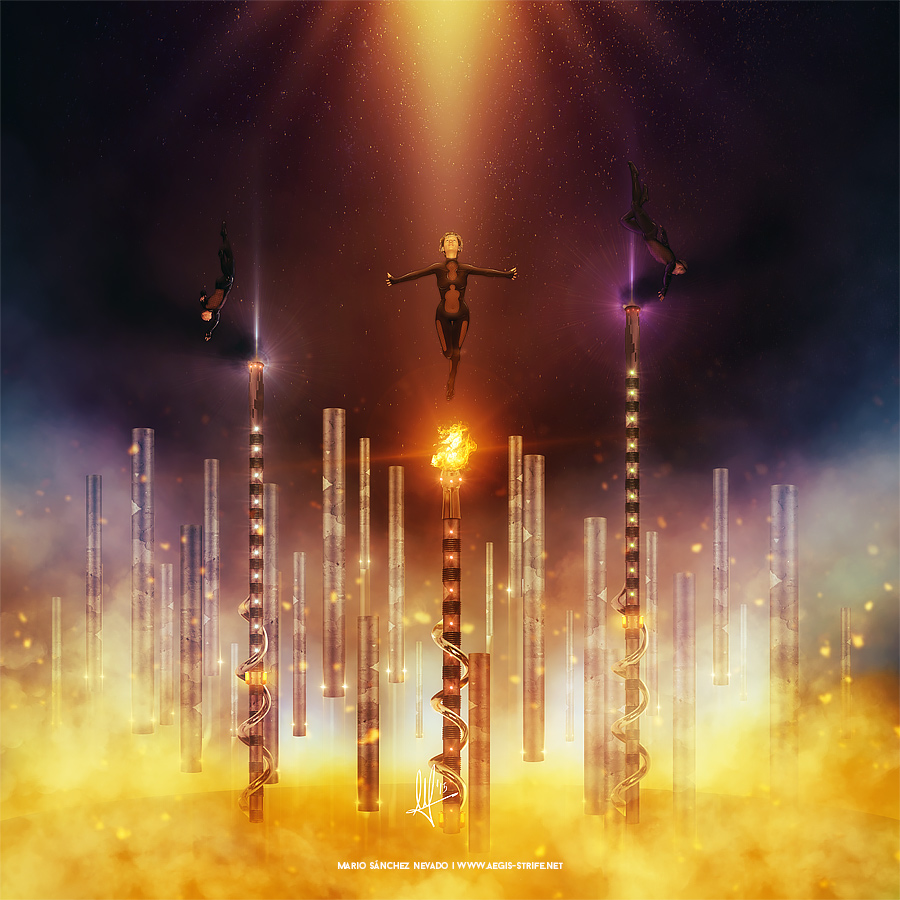 This is the momentum depicted in the image. As the central performer touches the ground, the principal pillar/pipe starts to rise very slowly. As it reaches half its height, the secondary main pillars from the lateralls start emerging faster than the main one. As they are half-height, the principal pillar reaches its peak and lights the fire. Seconds later (two at most, the idea is to have them emanating fire/smoke almost at the sime time, with a slight time difference), lateral pillars reach their highest heights and start throwing the smoke. The central performed would stay still for a few seconds again in this position, until recovering his/her upside-down pose before returning to the ceiling. 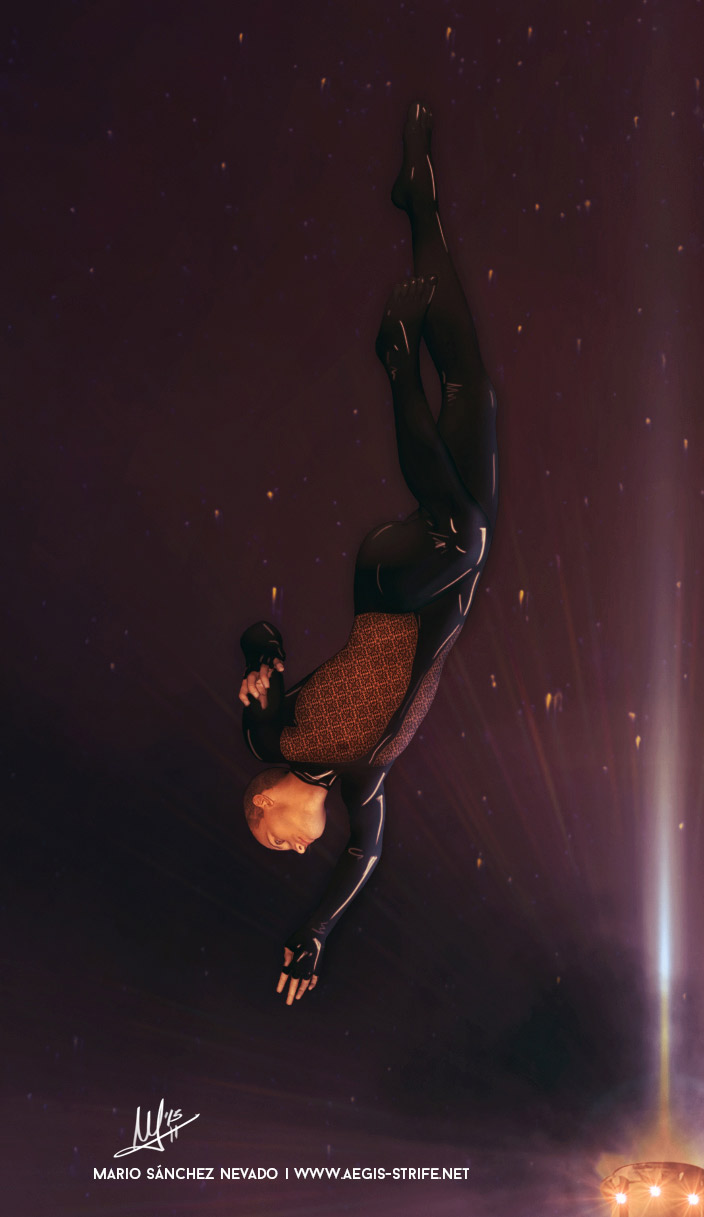 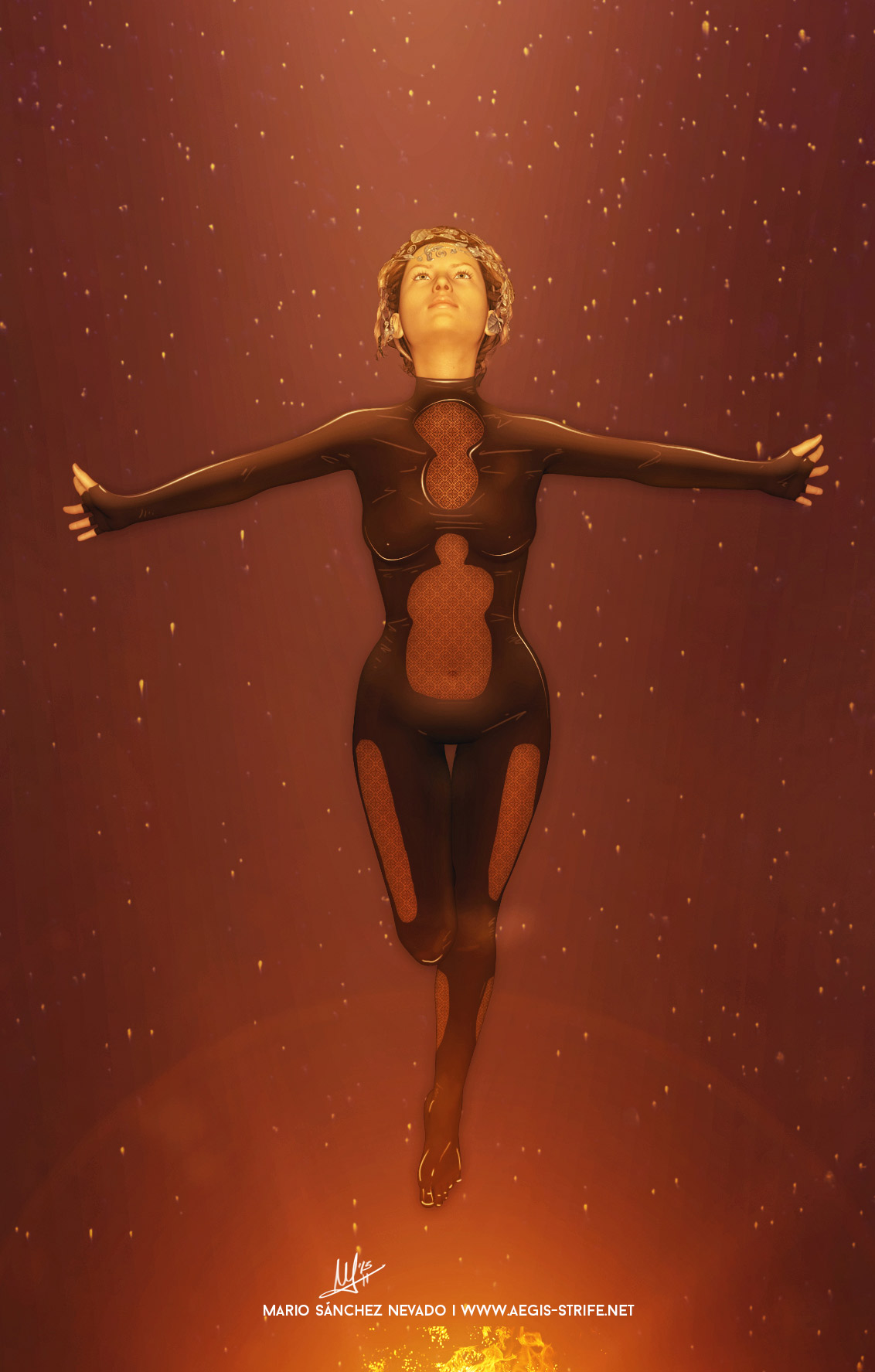 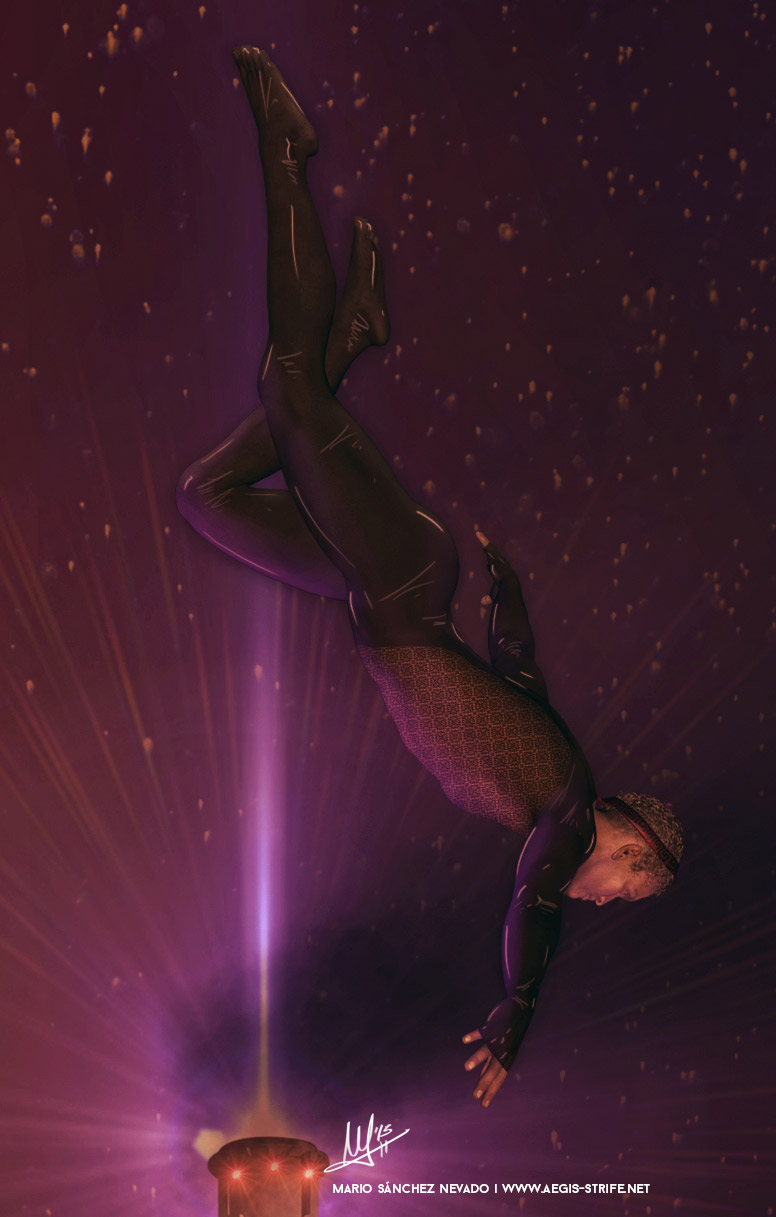 Parting from the futuristic wardrobe setting of the reference given, the movie “Aeon Flux”, and taking references also in other films like “Matrix”, I have envisioned the outfits as black latex/nylon/synthetic material stuck to the skin, revealing some parts of the nude body behind. This shall be coherent with the futuristic visuals of the set, and will help the bodies to shine thanks to the material of the dresses when the lights are reflecting on them, making the performers stand out in the middle of the atmosphere created mainly via the reflection of light in a heavy usage of fog/smoke to give depth to the scene.

On the empty areas of the dress, a pattern-like semi-transparent kind of fabric or web can be used to avoid undesired wrinkles and parts of the body coming out of the outfits. 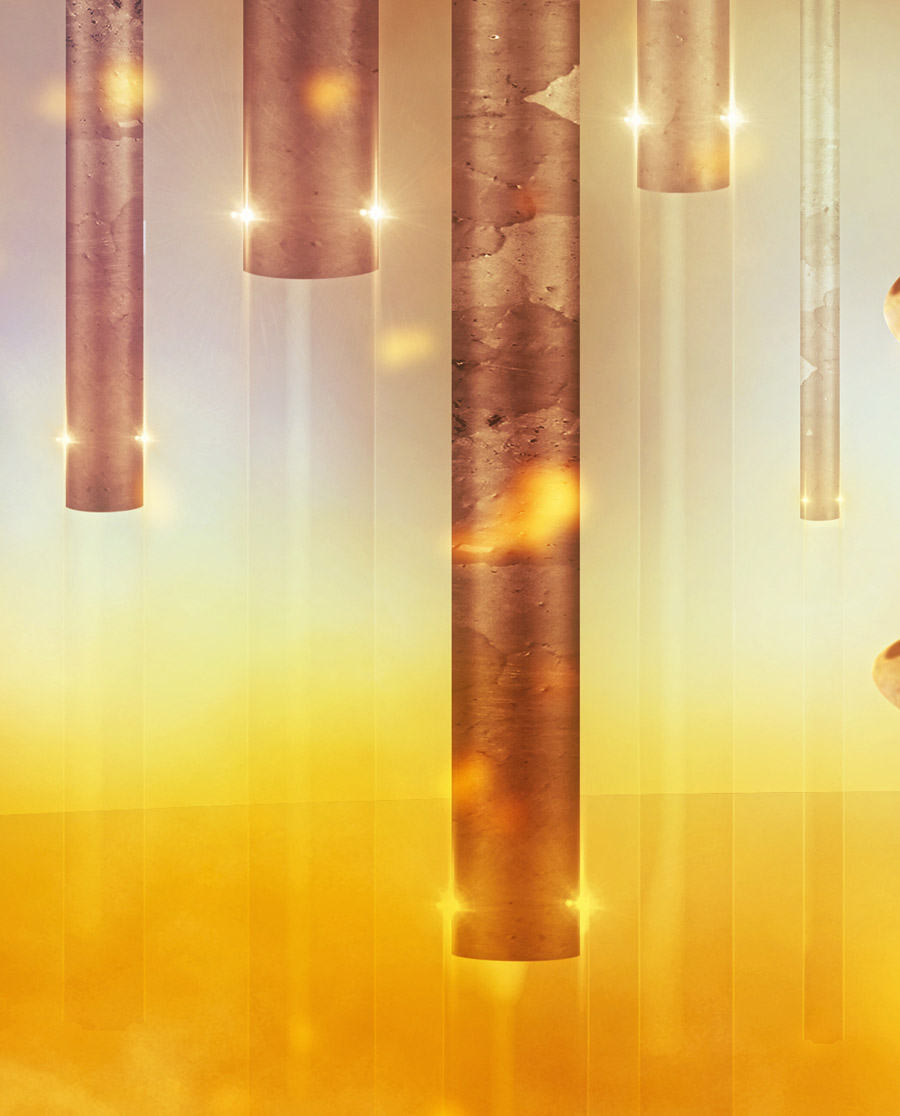 To empower the visual idea of ascension, I have designed a set of pipes that are made of steel in their upper half, while the bottom half is made of glass or a transparent material. This way, it will look that the pipes ascend in the sky as well, until a certain degree. I ignore if this is an isolated scene in the whole performance, but I have envisioned it in a way that as soon as the performers disappear, we have a lights out moment before the next scene, if any, starts, and the pipes are again under the floor. 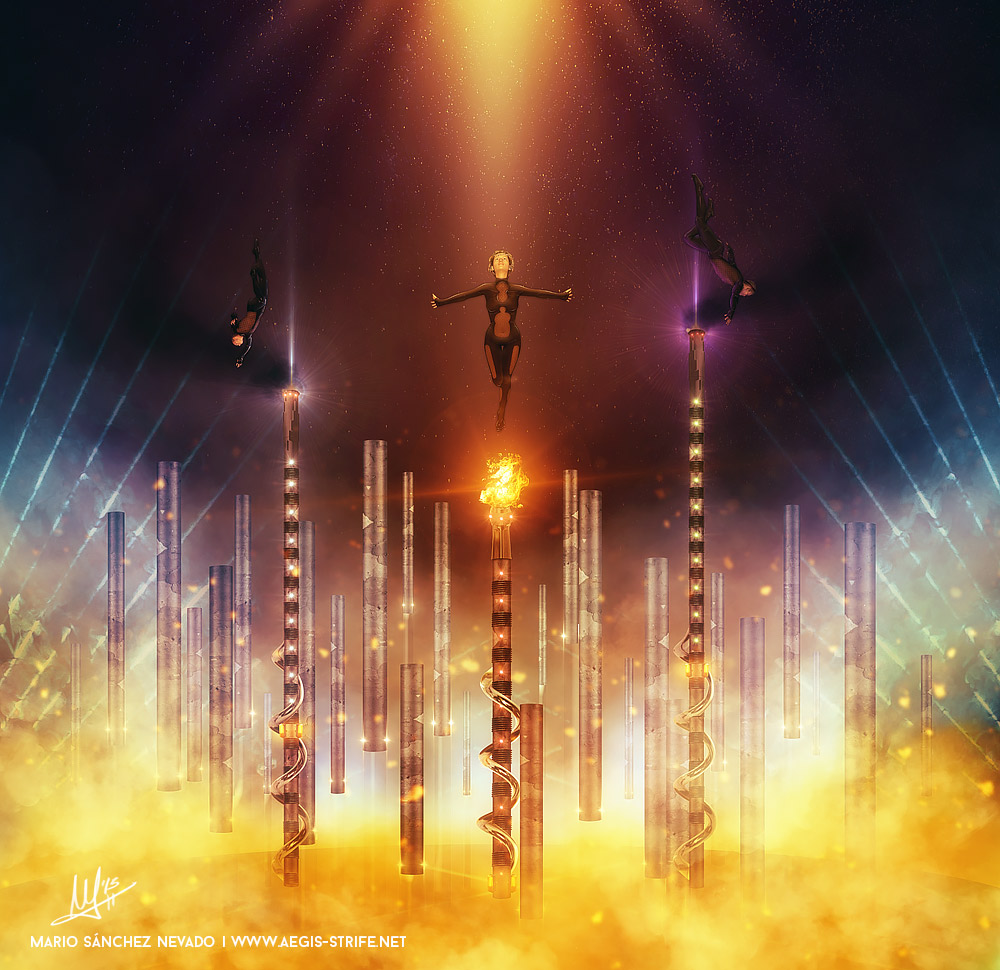 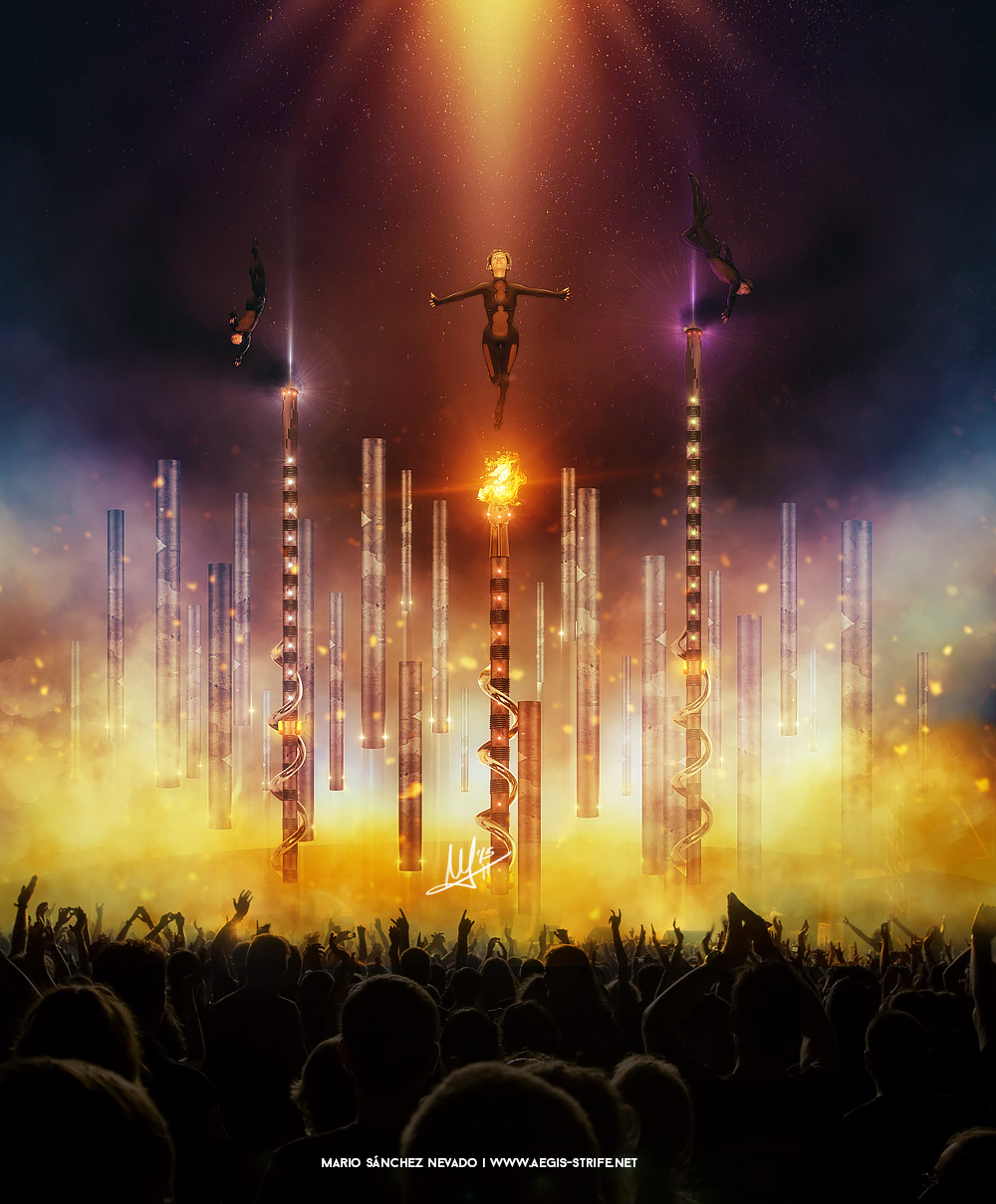 Even if this set design will not see the light of day, I feel proud of have challenged myself to design this in a single working day. Definitely it’s something I wouldn’t mind to really work in, in the future!